Written and performed by Alison Neil

Coffee shops and tooth-worm, smuggling and mouse-skin eyebrows… Amid the fascinating trivia of mid-eighteenth century life, Mary Cowper De Grey recounts the true story of a group of Ladies of Quality who determined to make Shakespeare fashionable.  The success of the Shakespeare Ladies Club echoes down the centuries.  Mary also has a very personal tale to recount – her involvement with a young and ambitious would-be actor… David Garrick.

Mrs Cowper De Grey then introduces her surprise guest – and the Lords, Gentlemen and Ladies of the audience are told a very different tale – of a London unseen by People of Quality.

London in the mid 1700s: vivacity and prosperity, marvels and great achievements in art and science; when the first steps were taken to quell the squalor and brutality of life for the poor; and women were not staying at home, or keeping quiet…

The Georgian era is revealed – as Mrs Cowper De Grey (and guest) entertain!

This is a slightly extended version of ACT ONE 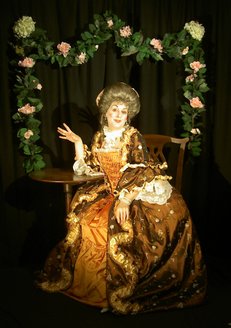 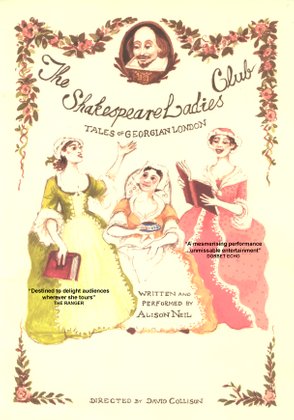 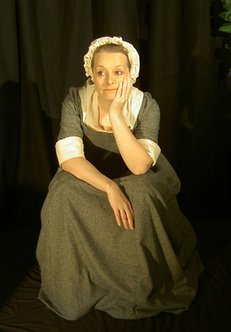 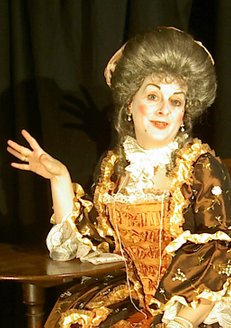 “Eighteenth century London comes alive in the skilled hands of Alison Neil… unmissable entertainment. A mesmerising performance by an actress whose immaculate research and attention to detail makes her productions not only entertaining but wonderfully informative too.” DORSET ECHO

“Fantastic theatre – the audience loved it.  A highly polished performance, fantastically researched. The detail of both performances was exquisite…hard to believe that the same performer took both roles.”  SPOT ON RURAL TOURING

“A role that allowed her a full repertoire of characterisations… and had the enthusiastic audience demanding four curtain calls. Like her previous one woman performances, is destined to delight audiences wherever she tours."

“Alison’s powerful performances are a joy to watch.  Her writing has a light touch and her depth of research is unsurpassed.  A tour de force performance.”  VILLAGES IN ACTION RURAL TOURING NEWSLETTER

"…a fascinating insight into Georgian London, jammed full of historical fact. Told with humour, sympathy and attention to detail… the two contrasting stories are both informative and entertaining, performed with energy and conviction."

“An eye-opening look at Georgian London from both sides of society, directed wonderfully by David Collison”  NEWARK ADVERTISER

“Alison Neil captures the essence of these historical figures with such potency that you feel as if you know the characters intimately.” CARMARTHEN JOURNAL